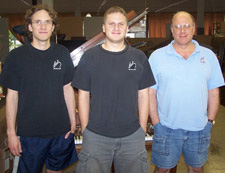 Posted at 10:47h in Uncategorized by Sujay 0 Comments
0 Likes

When Janos Fekete crossed the Atlantic in the late 1880′s, he couldn’t have known that more than 100 years later his grandson John Ford would play a role in redeveloping downtown Peekskill.

Today, a fourth generation of Fords (it was changed from Fekete) is now learning the craftsmanship that their Hungarian immigrant forbearer brought through the gates of Ellis Island.

John Ford, the owner of Ford Piano at 15 S. Division St., is passing on the skills his father and grandfather taught him to his sons John (far left) and Mike (middle) at the family business in the heart of Peekskill, a site that Ford moved his company to from his riverfront shop on Water street in 1999.

Ford’s move from the 5,000-square-foot space on the riverfront to his current 20,000-square-foot building was a key in the growth of the company, which now lovingly rebuilds 40 to 50 Steinway, Knabe, and Mason & Hamlin pianos every year. A rebuilding project can take three to six months, depending on the condition of the piano when it’s received at the shop.

Ford has trained his nine full-time employees in the intricate craft of rebuilding sounding boards, restringing with high-grade steel and delicately drilling out holes in the pin blocks. They use only special Sitka spruce wood grown in Alaska that produces a unique, clear sound in the pianos.

About 75 percent of the work is rebuilding for clients and the rest is refurbishments of prized pianos that Ford accumulates for resale.

The 15 S. Division St. building, which was once Kittinger’s store, has three floors. The main floor is a combination workshop and showroom, where a dozen grand pianos stand on display. Ford and his staff do intricate repair work in the back of the display area.

In the basement, heavier work involving heating, bending and drilling takes place, along with painting and refinishing. A large storage area in the back holds dozens and dozens of stacked pianos, including one once owned by famous ragtime composer W.C. Handy.

John Ford is passionate about rebuilding pianos and proud of the heritage that taught him the skills to carry out his craft.

His grandfather could build three pianos in the time it took other workers to build two, and he went on to work as the foreman at the Steinway factory on 14th Street in Manhattan in the 1890s and eventually started the Fekete Piano Company in Manhattan in 1897.

“He was known as the best [piano] builder in New York,” Ford says of his grandfather.

His father, John Ford, carried on the tradition, creating a line of innovative piano repair tools that became the standard of the industry, in addition to building up the family’s repair business that he passed on to his son.

As John Ford carries on that tradition, he’s also working to further Peekskill’s development as a destination for visitors. A key part of that development is adding entertainment to the artists’ community that is growing here.

Over the coming year, Ford intends to keep working on his next project, a 250-seat restaurant and cabaret that he plans for a building he owns up the block at 23 S. Division St.