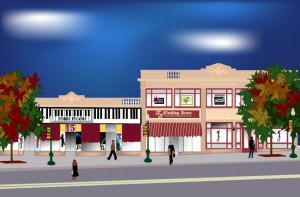 Posted at 10:50h in Uncategorized by johnford 1 Comment
0 Likes

A former department store known as the Hermax building is due to become home to an estimated 200- seat music hall.

John Ford, a businessman with a local piano refurbishing business who is finalizing a deal to purchase the property at 15-27 South Division Street, plans to convert the building into performance space for recitals concerts and dances.

“I want a place with a stage that is acoustically vibrant,” Ford said.  “A place to play music – from Reggae to Rockmoninoff.”  Ford and a partner plan to create a nonprofit group that will train talented school children in the performing and visual arts for free.  The nonprofit will be a separate organization that will be located inside the building.

“We were able to take lessons as kids and not because our parents could afford them “Ford said.  “If we get one kid involved, we thought that would be something good.”

Ford purchased the Hemax building from the city’s Industrial Development Agency for $325.000.  Negotiations with the IDA began in the 1990s.  Ford said he is about two month from closing the deal.  “Originally, I wanted to use the music hall to showcase pianos,” Ford said.  “But I also wanted a place where I could listen to some good music in my hometown.”

The city expects the hall will attract crowds into the area.  City officials have said the arts are a key part of the revitalization of Peekskill’s downtown economy.

“There really is not a venue like this in the area right now,” said Carla Williams, the city’s director of economic development.  “It will offer musicians new opportunities.”

The city is having a celebration of the purchase and redevelopment of the building at 9:30 a.m. today.  “We’re excited about the project,” said Alice Jane Bryant, executive director of the Paramount Center for the Arts.  “It will help us meet our dream of creating a cultural center in Peekskill.  On either side of us there are wonderful things happening.”

The Paramount, at 1008 Brown Street, is within walking distance of the Hermax building.  It is also doors down from a building formerly known as the Paramount East building at 1016 Brown Street.

A Peekskill construction company is proposing to create professional office space and artists lofts in the Paramount East building, the city announced recently.  Fourmen Construction purchased the building.  The company plans to lease the lower level to the city for cultural and recreational events.

A music hall will be constructed on the ground floor of the two story Hermax building with seating for 200 to 250 people.   A Woolworth’s and later a department store called Tuller’s at one time occupied the ground-floor area.

Ford said construction on the facade is due to begin next week.  He estimates that renovations of the entire buiding will take about two years.  He said he has applied for a $45,000 state grant to help pay for refurbishing the facade.

Ford is the third generation of piano refurbishers in his family.  He opened Ford Piano Rebuilding in Peekskill during the early 1980′s.  Ford, who plays the piano, said he will enjoy performing in his own music hall.