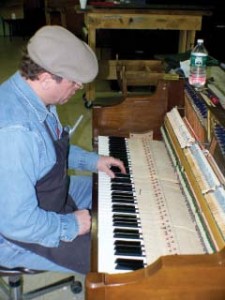 Posted at 10:57h in Uncategorized by Sujay 0 Comments
0 Likes

John Ford Jr. Can Rebuild an Instrument From the Bottom Up…

Like people, pianos decay over time. The instruments seem to be static, but the strings exert 20 tons of pressure on the frame, which eventually tears the inside compartment apart.  The passing years also ravage the finish and the intricate mechanism known as the action, a series of joints and levers that link the keys with the hammers that strike the strings.

Pianos have one major advantage over humans, though: They can be overhauled to a state as pristine as the day they left the factory floor.

In the piano-rebuilding business, most of the work is done by specialists.  Belly experts fix cracks in the soundboard and repair the pinblock, which holds the tuning pegs of the piano.  Refinishers are the trade’s cosmetic surgeons.  Action masters ensure that each key lines up straight and that the hammers hit the strings at the proper angle with the right amount of force.  Tuners add the final touch, turning discord into harmony.

As a general practitioner in a field characterized by a strict division of labor, John Ford Jr. is an anomaly.  Mr. Ford’s expertise in all phases of piano rebuilding results from his unusual upbringing, where he learned at the hands of two masters, his grandfather Janos Fekete and his father for whom he is named.